War Relic was not anyone's choice for the most viable Man O' War bloodline, a bad tempered and possibly dangerous horse, with a good but not spectacular race record--although he did beat the mighty Whirlaway once. But, there he is, 80 years after his birth in 1938, with a long reaching and excellent genetic heritage, and not just in the States, but in France and England as well.

What he has is potency in bloodlines that count. 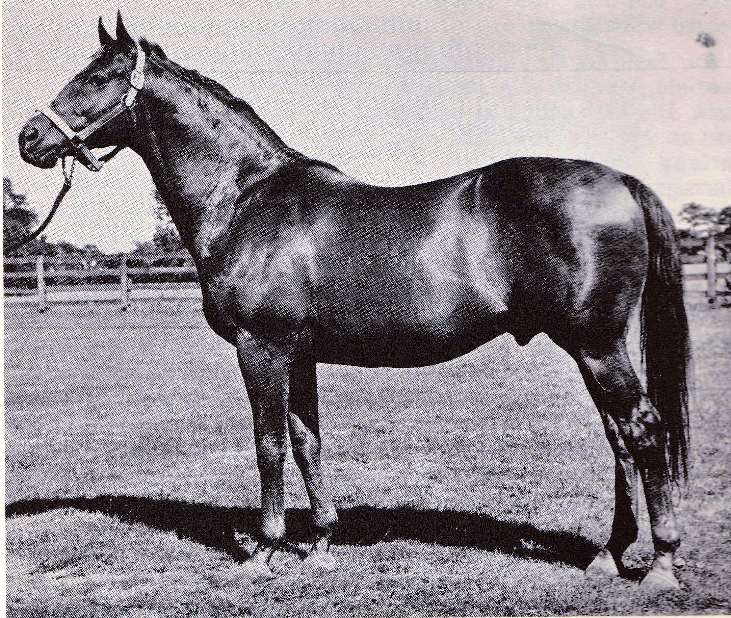 Reading Mr. Hewitt's Sire Lines, a industry established reference, we find a scathing account of him, leaving you believing that War Relic was a really crappy horse and he left little of importance. Plus Hewitt strongly promoted the idea that his breeder, Sam Riddle, mismanaged the entire stud career of War Relic's sire Man O'War as well.

"The miserable opportunity afforded him by his owner Riddle, whose mares were of marked subnormal quality." And then that " War Relic was not a great success as a sire.", even while listing Battlefield, Intent, Relic and Missile, all stakes winners (page 561 Sire Lines). His dismissal of Mr. Riddle's program is pretty severe, as well as the career of War Relic. That book came out in 1977, so perhaps he would have changed his mind when he saw the success of the Intent line? Or perhaps Mr. Hewitt rates a sire's success solely its position on the sire list, in this case #6? Or maybe it is Mr. Hewitt cannot read a pedigree for genetic dominance?

Mr. Hewitt, sponsored by Bloodhorse, had a huge following, therefore many believed his statements, and you will find his work on most Thoroughbred breeder's shelves, a trusted reference--I have two copies. And it is a shame that his criticisms were just repeated like rote by a generation of equine writers. Back when I bought my copy of his book, I accepted it as an authority, but over the years have found it isn't always fair, as we see in War Relic's chapter. For instance, after the years I spent tracing the traveling of American sport bloodlines out of the States, and then following their careers in England and in Europe, I found War Relic's son Relic was imported into France right after the Jersey Act was repealed (1950--his sire War Relic and his grandsire Man O'War were considered 'half-bred' by the British Jockey Club), and he had immediate success as a sire. And War Relic's entire breeding record shouts that he was a great success of a sire.

It was such a relief for me to find the masterful work of Rommy Faversham: Samuel Riddle, Walter Jeffords and the Dynasty of Man O' War 2005, where a real examination of the lineages designed by Riddle was carried out, and surprise, Mr. Faversham exposes plainly, that the breeding plan of Riddle and then Jeffords was well thought out and managed. He debunks the industry narrative that Sam Riddle was a poor breeder and shows us the intricate pedigree designs Riddle and his team constructed, plus concludes the earlier negative attitude may have been spawned by jealousy.

"Was Riddle incredibly lucky to get Man O' War? Of course. Did he know what to do with him once he got him? Absolutely. Sometimes that can drive other people crazy."  (.p. 166)

Riddle proved himself as an intelligent stud farm owner and he hired the best to help him choose mates for Man O' War, including his stud manager Elizabeth Daingerfield (see chapter 3 of Faversham's book for the details.) And she did a bang up job! Let's not forget the Triple Crown winner War Admiral, who became one of the most important broodmare sires of the 20th century as well.

Rommy was not alone in his reversal of Hewitt's determinations and statements, for instance, we find the work of Ellen Parker, who has dedicated her life to identifying and publishing the truly great broodmares in the Thoroughbred, has a lot to say about the excellence of War Relic's dam Friar's Carse, who she rated as a 'reine' for the top quality maternal dynasty she produced, this a mare that Hewitt lumped in with the 'subnormal'.

"Conventional wisdom has it that Man O'War was bred to ordinary mares" (Parker). But Ellen Parker, who does her own research found otherwise also, that is, the previous negative judgment was silly. On the breeding of Friar's Carse: "For Riddle actually planned the mating of this filly so that when she became a broodmare she would be an outstanding mate for Man O'War and would affect an inbreeding experiment he had been considering." (Read Parker's full report on Friar's Carse here).

As always on this site, we look to the pedigree as a map of the genetics of the horses (see Understanding Pedigrees). War Relic is 3x3 to both Fairy Gold and Rock Sand. His damsire, Friar Rock, is 1x1 to both; and his sire is 2x2 to both, so Man O' War and Friar Rock are very closely related, actually Friar Rock's genetics are found 100% in Man O'War, but they are not full brothers because Man O'War carries lines that Friar Rock does not, Hasting and Merry Token, although there are many common lines in the background. 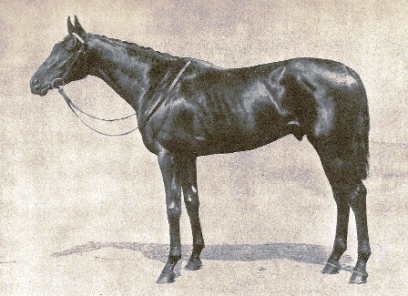 So, Friar's Carse's sire, Friar Rock is by Rock Sand out of Fairy Gold (daughter of Tadcaster, not Bend Or), but don't overlook her second dam: Problem, because she brings in some reinforcement for the Rock Sand element by providing the 3/4 sister of Roqueburne, Blue Rose, plus the full sister to St Simon (Roquebrune's sire), Angelica. This fortification makes Rock Sand the most dominant genetic force in War Relic and bolsters the lines of Hermit and Newminster in the background.

Fairy Gold was long thought to be a daughter of Bend Or, but now we know she was really a Tadcaster daughter, and she brings in more genetic strength in different but excellent lines. We see a double of Himyar, the sire of both Domino and Quesal, which on closer examination prove to be more then 1/2 related as they are out of dams that are 3/4 related: War Reel and Lizzie G, extremely potent mares with inbreeding 2x3 to 3/4 related sisters Judith and Reel, making this a power line. Plus Domino is 3x4x4 and Quesal 3x4 to Lexington RH (making 8 lines of him in the 6th through 9th generation-critical mass, and connecting the potency to the sireline via him.)

This unlikely sire (in many minds), has tremendous influence, here in the States via Intent and Olden Times most prominently, and overseas in France and England from Relic's offspring (son of War Relic). For example there is the lines of Pieces of Eight and Buisson Ardent, both good sires, but eclipsing them is the produce of the French bred daughter: Relance, most notably the three high class racers and 'chef-de-race': Reliance (stood in England), Derby winner Relko (stood in England) and Match. Relic sired other important horses, like Pericles who became a strong bloodline in the Dutch Warmblood, and like Mystic, who raced in France, England and USA, and went on to build a reputation of as a sire of top show jumpers and steeplechasers.

Here in the States, Relic's son Olden Times, a good race himself, produced many stakes winners. And then there is Intent, son of War Relic, whose dynasty is carrying on the sireline in power. The Intent line appears most strongly in the line of In Reality, his grandson who is inbred to War Relic 3x3, plus has Fair Play 5x5x5. A sire of sires, with such greats as Known Fact, Valid Appeal and Relaunch who in turn has several sons carrying on the lineage, such as Carnaveral, Cees Tizzy, Arromanches and Honor and Glory.

So, it turns out the sireline (Fair Play) discounted by Hewitt is one of the few that stands the test of time, with far reaching influence not just in racing, but in jumpers and steeplechase horses as well.

Looking at his three hottest transmitters of excellence (click on each name to bring up the pedigree): Relaunch (Intent), Relance  and Olden Times, we see some additional standout duplications (dominances). Relaunch adds to the double of War Relic which his sire In Reality brought with a double of Balladier 5x5 and Bull Dog 5x5 plus a Man O'War daughter: Spotted Beauty on the damline, and a Man O'War sister, Oval (Fair Play daughter). Olden Times amps up the potency with a Tourbillon double 3x4, and Teddy 5x5. Relance brings in Durban 4x5 and Sunstar 5x5 plus another line of Rock Sand.