This is a brief study on the American Thoroughbred's contribution to the world's stamina bloodlines via the chef-de-race list.

I must ask this question: Does the equine industry have some sort of vested interest in promoting the American Thoroughbred as unsound and lacking stamina? Because I wonder from all the expressions of this judgment, that comes complete with 'matter of fact' statements, proclaimed with confidence, that  the sound and stamina lines come from Germany, Australia and Ireland, while they point out that America just breeds unsound and sprint only race-horses.  I hear statements all the time like: "if you want to add real stamina then cross in a German Thoroughbred." Yet I knew in the chef-de-race list that compiles  the best bloodlines that transmit specific race length ability that Germany is responsible for only 4% of the world's stamina lines, and America produces 24%...the 20% difference is significant.

Besides, I knew that the American horse held the world records for four-mile heat racing in their root lines from the 1800s, which is truly a real stayer performance test, therefore the American Thoroughbred was holding in its gene pool the highest quality stamina genetics in the world. And we all know that genes travel through the generations virtually unchanged (except in the rare cases of mutations), and so those same bloodlines were resident in the American horse, able by the informed breeder to be concentrated to create stamina potency. Yet the common consensus is the American Thoroughbred's scope of racing talent is sprint only? This thinking just does not make sense. 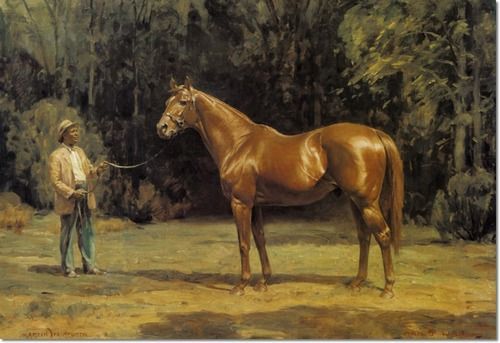 I addressed this curious mindset against our domestic horse in my first book: North American Sport Horse Breeder (appendix F), because I encountered it continually in the sport and warmblood world, even to the point that people were openly stating: "avoid American Thoroughbreds because they are a sprint-only breed and built downhill". In 2010, after studying Dr. Roman's chef-de-race list I discovered that 24% of the stamina lines in the world were American Thoroughbreds, so I asked him if I could reprint his list in my book for discussion of this issue, and he gave me permission.

At that time there were 76 horses in the two columns of his list that contained the stamina sources, labeled "Solid" and "Professional". Dr. Roman divided his list into 5 categories: Brilliant (sprint), Intermediate (sprint), Classic (1 to 2 miles),  Solid (stayer) and Professional (stayer), based on their pedigrees and their offspring's abilities. Since Dr. Roman's retirement in 2016 the editing  of the list has fallen to his partner Steve Miller, and it is used in determining dosage ratings. 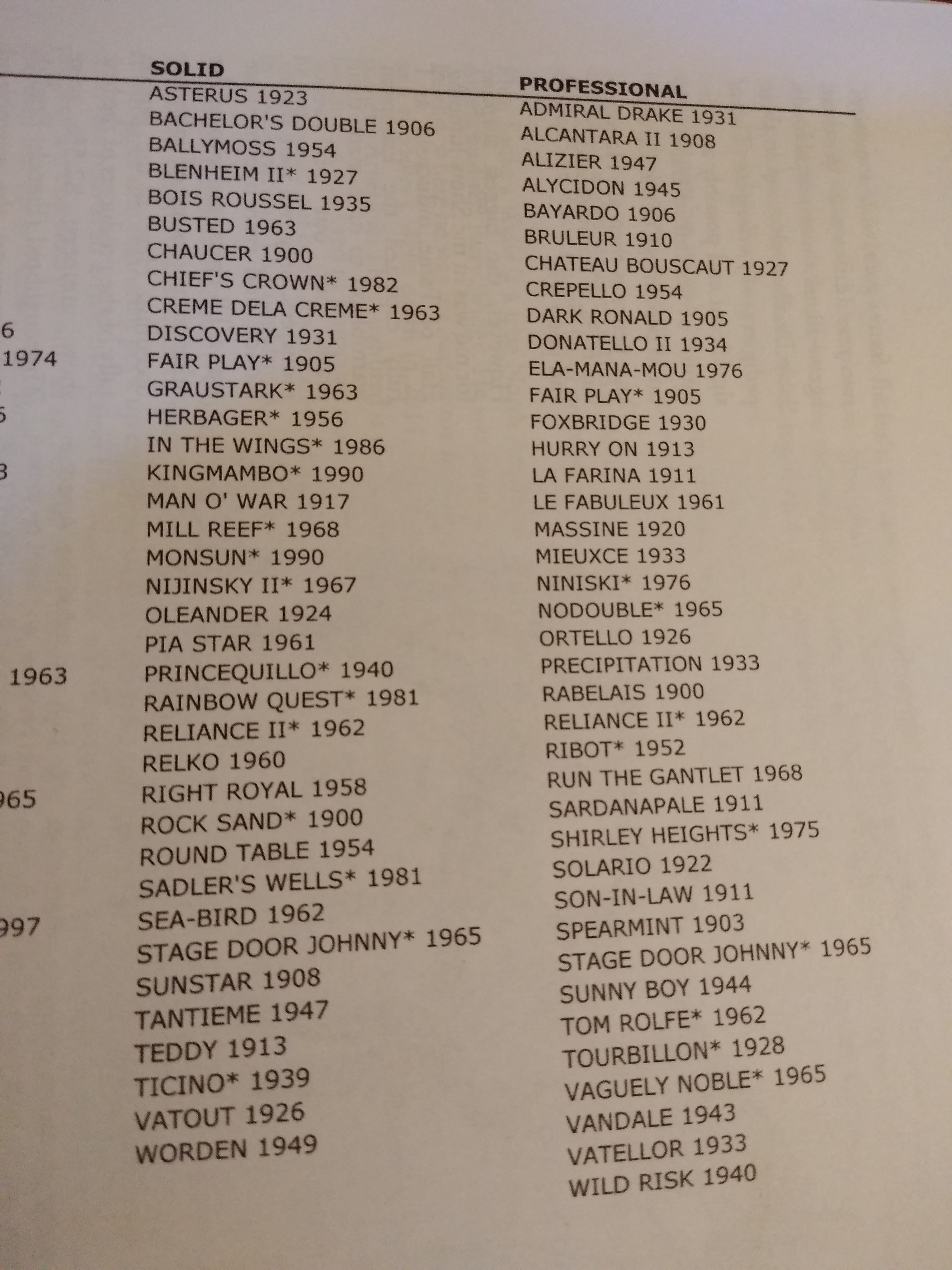 Of those original 76 stamina bloodlines on the chef-de-race list, 18 of the entries were American-breds, which equates to 24% of the world's celebrated stamina lines being American bred.  The world leader at that time was France with 27 horses (35%), England was second with 22 (29%) and we were third with 24%....but then there was a huge gap to the next countries' bloodlines, with Germany and Ireland represented by 4% each, then Canada and Italy with 1.3%. From this exercise it appears the industry narrative is greatly inaccurate. This American breed put-down was not limited to the sport horse world, it was popular in the Thoroughbred industry as well. 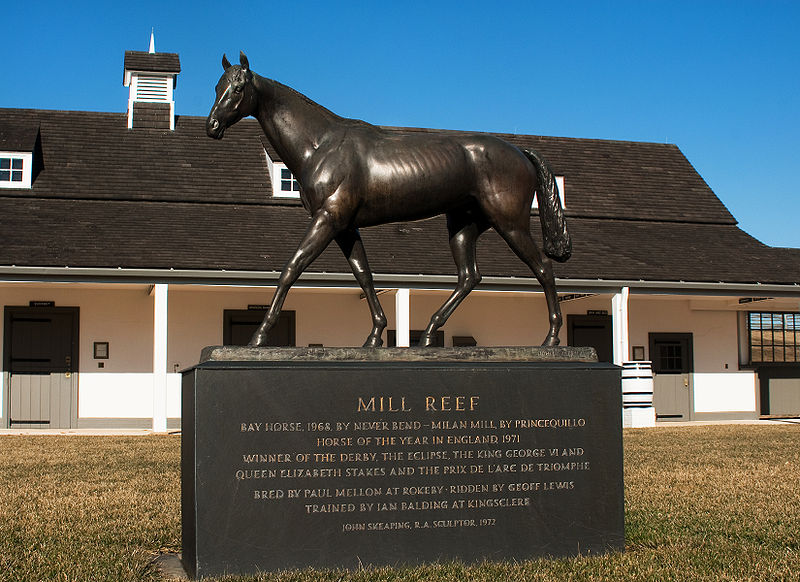 Now fast forward to today in 2020, and we find the narrative remains the same, because I encounter it continually in discussions groups, and the people projecting that thinking are sincere.. They believe they are stating hard fact...everyone knows this they tell me!

So I decided to take another look, maybe the American horses fell off the list, and the great products of the German, Irish and Australian breeders have climbed in the ratings because the overwhelming quality of their stamina loaded products. ...it been a decade, so what is the story today?

First, it seems the list has been greatly reduced from the 76 stamina sires down to 50, at one site at least: Pedigree Pro, and of those 50, 12 are American, which is 24%, showing that the American bloodline contribution is basically the same, but curiously there are notable individual chefs omitted (Sadlers Wells, Round Table, Run the Gantlet, Stage Door Johnny). This altering of the list made me wonder: how could Sadlers Wells not be a chef? He was only added in 1998 and now he has been removed? He led the sires list for 14 years; no one in recent time is close to that record! And Sadlers is not a chef anymore? So I emailed the website about this, but did not get a response.

While searching for information, I came across several comments by other people, many of them were asking why Storm Cat, A.P. Indy  and Danehill have never made the chef's list. (A.P. Indy is shortly to be added as a chef). This omission of great sires from the list is where most of us get confused. Steve Miller explained  a horse must demonstrate it is potent for a specific distance or two, and both Storm Cat and Danehill produce winners in every category so they have been unable to assign them chef status. This is strange to most of us. We want to know who the good sires are, which lines are of consistent greatness in performance, but to be a chef the horse must be a 'typesetter' for a specific distance, not just a great sire. Fortunately there is a site, Werk Horse, that has comprised a chefs list of the best sires, without the specific typesetting requirement, which they call "Quality Sires", and there we will find all the regular chefs, plus other great sires.

Okay, controversy aside, another interesting fact is that in the newer 2020 list Great Britain now is leading with 16 countries (32%), and France is second with 15 entries (30%), and as I said, America is third again with 24% (12). But I also discovered that Sadlers Wells was never removed as a chef from the real chef list, which places all the results put forth at Pedigree Pro in question. For example if we add back the 4 American stamina chefs Pedigree Pro removed, we find that it pushes our percentage up to 32%, equal to England for first place...however,  we must assume some of the French and English entries were omitted as well as ours, so the best we can do is look at generalities. In this new version, we see that once again there is a huge gap in the number of stamina contributors down to the next most significant countries, with the Irish heading out Germany this time with 3 entires (6%), and then Germany is in 5th place with 4% again from 2 entries...but Ticino was removed in this new list, once again putting this percentage into question; Canada and Italy are unchanged with 1 entry each (1.3%). In general then the results are much the same, with the switch of England leading over France the only significant difference, and considering an error ratio from the evidence of the omitted chefs, all the other positions stay much the same.

We can conclude then that 3 countries lead the world in the production of stamina bloodlines: England, France and the US, and they account for 85-88% of the world's stamina lines.

I also took a look at the Wikipedia list which was last edited in 2019, and it held 171 chefs for all categories. How many American horses make up the total chefs? It is 90, which is 52.2% of the world's best sirelines, not too shabby is it? Isn't it ironic that our supposed inadequacy in producing quality Thoroughbreds is contrary once again to the fact that America produces more than half of the world's best? 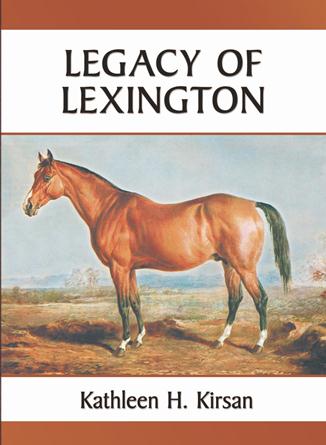 Learn what American bloodlines are really made of: Legacy of Lexington, available from most online book dealers