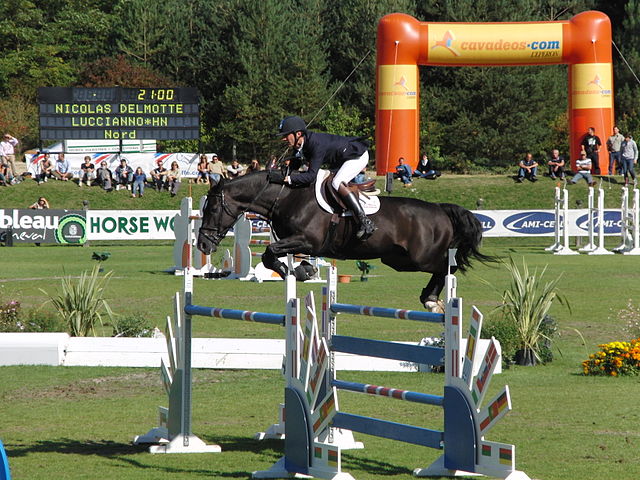 [This picture is Luccianno SF, ridden by Nicholas Delmotte; he is one of the many Corde descendants that have succeeded in jumping. This horse is a Selle Francais, receiving back its own Corde blood via a Holstein sire Burggraaf who is out of a Corde mare--he also carries the great Alme SF, another French line with trotter components--image by Eponimm and made available to the public via Wiki Commons.]

Cor de la Bryere, a 16.2 hand Selle Francais stallion was a significant typesetter--a classic improvement sire, especially for jumping style in the Holstein Horse. He became famous for imparting the 'bascule' form, with its back arch and well folded front legs jumping style, onto his progeny reliably. He created a dynasty of talented and lovely looking show jumpers for the Holstein breeders. He is one of the most significant European sport horse sires of the last century.

At the time of Corde's transfer to Holstein, a Selle Francais included in a warmblood program was unusual. The Selle Francais was not looked on favorably at that time, and even in his own country Corde was not valued. But this one horse did alot to change the course of the Selle Francais being used as cross-breeding stock.

There is plenty written about Corde, his legacy at stud, the lasting success of his line, but here we will look at his genetics. He is a perfect illustration of how an improvement sire (See Sport Horse Recipe) can transform a breeding program and why improvement sires are so useful. He provides significant racehorse and saddle horse elements. Corde is known not just as a hereditary jump transmitter, but for the style and suppleness he brought to the breed. His progeny are top level competition horses with lots of knee action and a scopey shoulder, which results in them being able to snap up their knees when they jump or extend well in dressage.

Almost 3/4 Thoroughbred through the top progenitors Rantzau and Furioso, Corde exhibits a pedigree that shouts pre-potency. He is 5x5 to Son-in-Law, the great sire of stayers, through a son and a daughter found in the dam and sire. And that combination is reinforced by Dark Ronald, the sire of Son-in-Law, being balanced by the presence of his sister Rondeau--who is the dam of Teddy--all of those lines are jump transmitters.

[For a full discussion of the jumper trait, and its main root lines in both the Trotter and the Thoroughbred see Standardbred Sport Horses.or the analysis of the Show Jumper Hall of Fame inductees dominant bloodlines.]

Corde carries on both sides of his pedigree Bachelors Double 6x6, sex-balanced, as well as Cicero 5x7 through a son and daughter also. Cicero, a son of St. Simon is also balanced and reinforced with a sister: Weir. Sex-balancing completes the genetic package that made the champion--it gives you the whole thing (sex-linked characteristics), therefore is something we should strive to build into our lineages (See Tesio Methods).

The Rantzau half of Corde has, in addition to Son-in-Law/Cicero/Bachelors Double, duplications also in a sex-balanced presence of Rabelais, Ajax and Royal Hampton. Rantzau, a full Thoroughbred, was a magnificent sire of jumpers and stallions. His success as a sire was to consistently pass on excellence in sport and breeding stock.

When I first wrote this article, like most of us, I only had a surface understanding of jumping lines. I could see certain lines were jump purveyors--such as Rantzau and Furioso, but seldom understood fully why. But since that time I have found the roots of the jumping trait, and can now clearly see why certain bloodlines are powerful jumper lines--they are the lines that have concentrated the original potent carriers of the jump.

In the warmblood jump sources, the most common potency is the result of critical mass in the root jumper transmitters Irish-bred Birdcatcher and the English mare Clemence or her sire Newminister. Lesser, but still often seen in force is Canterbury Pilgrim, Sanda and Bay Ronald. And in Corde there is a overwhelming background potency in both Birdcatcher and Clemence, plus some strong lines of Bay Ronald--typical sources found in the great jumpers. Those are Corde's main jumping dominances that he transmits to his progeny reliably.

But of course we know that Corde was not just a good jumper sire, he added something special--a beautiful arching of his back, a snapping up of his knees. And some of this extra polish came via his Trotter jump sources.

The dam side of Cor de la Bryere brings in its own type of potence through a brother and sister French Trotter, as well as adding to the sire's strengths. Corde is 25% French Trotter--I am sure you will be surprised to learn he carries a few American Trotter lines as well--almost all Selle Francais have American Trotter in them--many have significant amounts of our more recent Standardbred. Another great jump sire--Galoubet A SF, is 25% American Trotter, plus the world record holder for Olympic Gold medals in show jumping, Halla is 75% Trotter (50%Standardbred/25%French Trotter/25%Thoroughbred). So what is it that the Trotter has?


I have found that almost all English/European lines that jump have critical mass in a early English stallion with trotter traits (Herod), for instance Birdcatcher and Clemence are overloaded with this one sire. Plus the Trotters all carry Thoroughbred as well. The ancestry behind Herod on its own, Running Horse and Hobby,  also has been able to independently produce superb jumping stock-- all this is explained in detail with documentation and pedigrees in Standardbred Sport Horses. My point is the jumping trait has ALWAYS had a mid-gait component attached to it. Does it need a mid-gait gene to perform? I don't think so, but it was there from the beginning as far as I can trace (into the 1500s). All the Thoroughbreds, Trotters of the British Isles and America as well as our other native breeds all carry a common root ancestor: the Irish Hobby--a breed that could pace. Could the Irish Hobby jump? Yes, and very well.

With French Trotter and other trotter breeds having so strong a presence in super show jumpers, it would pay to take a closer look.

French Trotter is a trotter of substance, and it arose from the Anglo-Norman, heavy coach--light draft breed made from Thoroughbred crossed on Norman Draft. This is where its substance arises from. On to this base was added more Thoroughbred continually, Norfolk Trotter (called Hackney today) plus Anglo-Arab and American Trotter--later large amounts of Standardbred were brought in to improve the trotting gait and speed. The extra extension of the shoulder, the snapping up of the knees, and the extra ability to collect surely came down the genetic trail from the trotting components.

Recently the discovery of the gait-keeper gene came with some unfortunate theories attached to it--that a horse that carried mid-gait racing ability would not be a good jumper. We can see the short comings of this pronouncement, which arose in the scientists' rush to market their gene testing kit. Since that time the scientist who discovered the gene has explained to me that other traits not related to the gene itself, but present in the horse and/or breed can totally alter what they saw as a limitation. Jumping and other Olympic style sport abilities, such as a good canter, do not come from this gene, they come from elsewhere in the genotype, therefore a trotter (or pacer) may or may not be great at jumping. That is why the French Trotter and the American Standardbred are great jumping breeds--they carry overwhelming jumping traits, along side of their ability to race at the mid-gait--and it is plainly obvious by the historical record that the trotter is a fountainhead of jumping talent. My research has discovered that the Standardbred along with the Thoroughbred are the greatest carriers of the jumping trait in the world today.

The Selle Francais has risen to the top of the European leader boards and is being used extensively for cross-breeding to improve the jump in all WBFSH stock. It is interesting that our own 'trotter' (the greatest trotting racing breed in the world) is at the same time being banned as a 'not allowed' bloodline. I find it highly hypocritical that while preventing breeders from using our breed or its bloodlines that quietly some of them are using Standardbred, such as Zangershiede, where their recent champion international jumper Regina Z was actually 43% Standardbred.

Corde is an extremely successful sport horse line. So much so that I now hear breeders worrying about the Corde saturation in the Holstein breed. I have noticed personally that the male side of Corde is much more available than the female. His ability to jump and his style are the result of critical mass in the root jumping sources, re-concentrated through Birdcatcher and Clemence right to the front of his pedigree.

[For those of you who are looking for a way to balance an male only Corde presence, I came across a young stallion while doing research for the female balance of Corde for a client, and this sire should be a help for the overload of the male Corde line. without losing the benefits of his fabulous ability. This young stallion also contains a nice female balance for a male Ramiro line in addition. A cure for excessive presence of male Corde lines- Bratt Z.]